When the lovely Tristen Willis asked me to read and review her debut novel, The Genesi Code, I was so excited. I have loved supporting Tris’ candle store, Burning Pages Candles and am so happy to have the opportunity to support her book! 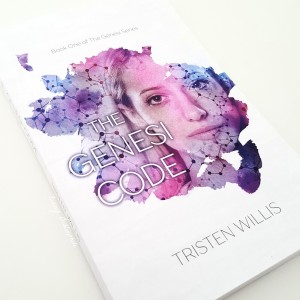 In order for me to read and promote her book, Tris sent me a reviewers box including the book and some Genesi Code themed items. This included a Delta Force badge that Tris’ designed as well as 4 mini candles inspired by 4 different characters of the book, a solid perfume inspired by the main character, Luka, and a Genesi inspired loose leaf tea all from her store Burning Pages Candles. These items are amazing and you will find pictures of them on my Instagram!
Now for the book.

The Genesi Code follows Luka, an 18-year-old girl who has spent 10 years training to get accepted to the Delta Force, a military task force, in order to uncover the truth surrounding her father’s murder. When her father died, he had been working on a cure for a genetic enhancement gone wrong, known as the Genesi Code.

I am going to start by saying that I was worried. Before even opening the book, I knew it would be a dystopian type novel which I have generally not enjoyed in the past. Then the first two chapters felt so repetitive and I was even more worried. I understand the need to set up the story and it is not always an easy task, but, for example, on page 12 there are two paragraphs that start with basically the same sentence just worded different. This was not enough to bring the overall book down because the rest of the novel made up for it, but I felt the need to mention it. I also did not like Luka at the start. She was focused on getting into the Delta Force and discovering the truth about her father’s murder, which is understandable, but she seemed more analytical towards people rather than considering emotions. This did not make Luka a bad character because she was wonderfully portrayed, she just was not relatable for me.

Thankfully, all of this worry and negative opinions me left me once I got to chapter four. For me, this is where the main story really begins. The writing style improved greatly and the pacing smoothed out. The plot also began to unfold in an organic way, not feeling forced, which I very much appreciated. We are introduced to most of the characters and, while they were described in detail, it was easy to picture them. This helped to get a real feel for the training facility where the majority of the story takes place and how everyone worked in this environment. There were a few predictable events that occurred in the following chapters during training and lessons, but it would have been difficult, if not impossible, for some of these to have been a shock.

An element I really enjoyed was the little nod to Sir Arthur Conan Doyle’s The Adventures of Sherlock Holmes. It is one of Luka’s favourites and one of mine too. While it did feel a bit odd to have this little scene in the book, page 84 did change my feelings towards Luka. After that scene, it is sort of quiet until chapter 10, which is about the halfway point of the book. From here some of the big questions set up from the start of the novel begin getting answered and this really pushes the story forward.

The last 75 pages of this book are where the bulk of the excitement is at for me. The pacing here was great; it was exciting enough to have me sitting on the edge of my seat while still allowing the necessary information to shine. The end of the book contained more answers, more questions, a somewhat surprising plot twist and one amazing cliffhanger ending. Yes, The Genesi Code has one of those dreaded cliffhangers, but I was expecting it given this is book one of the series and it happened in a great spot. The suspense for book two is already building.

Overall, the writing was pretty good from chapter 3 onwards and although it took me a bit to warm up to, the story had me captivated by the end. The characters were detailed and easy enough to picture and I enjoyed the little references they make, specifically on page 84. So time to award The Genesi Code a number of stars. I would probably stretch it to a 4.5 but for Goodreads purposes, I am giving it a 4-out-of-5. I liked this book so much by the time I read the final page that my first thought was wondering when the release date for book two will be, and book one is not even officially released until September 1.

Speaking of its release, you can pre-order yourself a copy of The Genesi Code by Tristen Willis from Amazon, Book Depository or Booktopia! I have linked all of the shops to the listings for your convenience.

Another way you could possibly get your hands on a copy is to enter my giveaway! Three entries have already passed but there are two more you can do for your chance to win. This entry is for those who read my blog, so all you have to do is like and comment on this post! Include your Instagram name in the comment, as that is the platform I am basing my giveaway from, and answer some of the following questions.

5 thoughts on “Review – The Genesi Code by Tristen Willis”