During the February TBR Knockdown 24-hour Readathon I read all the Kasie West books I currently own. These will be short reviews as there is not much I can say without spoiling the entire book. 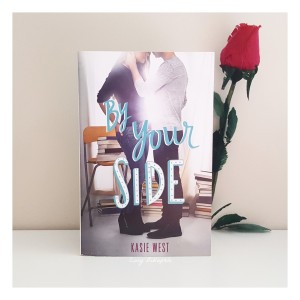 Title: By Your Side

A girl accidentally gets trapped in a library and is not happy about it. Then she finds out she is not alone.

Autumn is our main character for this book and is rather relatable. She has anxiety but does not want to let that stop her from being “normal”. She is studying at the library with a group of friends before going away for the weekend. Autumn also hoped this would be the weekend her and Jeff would finally become a couple. As they go to leave, Autumn goes back to the library to use the toilet but ends up getting locked in the library which is closed for the weekend. While the idea of being locked in a cold library with no food is not ideal, some would pass the time by reading books. Autumn does not spend the weekend reading though, instead, she tries to get to know Dax – the guy she is trapped with.

Dax is described as a bad boy from his appearance to his loner attitude. Dax just wants to get through the weekend then sneak out as if he was never there, but with Autumn there that was never going to work. As Autumn peals back the layers of Dax we discover there is a lot more to him than what all the rumours have lead people to believe. After a dramatic exit from the library, Autumn is not ready to give up on the friendship she believes her and Dax have formed during their time in the library.

However, outside the library, there was also Jeff. He is sort of the class clown type of character but seemed to have a great heart. It is somewhat obvious Jeff wants Autumn as much as she had wanted him, but Autumn no longer seems sure. However, Jeff along with the rest of Autumn’s friends are a pretty good group of people and, for the most part, their friendships stayed strong through the multiple hurdles face throughout the novel.

I want to talk about the library for a moment. Wow. Multiple levelled library would be amazing, especially with all the break rooms, and it made for a pretty good setting. If only Autumn was a reader. For the most part, this book was well set out and executed. It was cute, it had highs, it had lows, and it felt like a fluffy read with a nice amount of focus on anxiety.

This may have to be my favourite of the Kasie West books I have read so far and I believe at least 75% of the reason is the library and what leads on from there.

Have you read any of Kasie West’s books?
If you had to choose, where would you prefer to be trapped for a weekend?

Let me know in the comment section or on my Goodreads review!

1 thought on “Review – By Your Side by Kasie West”