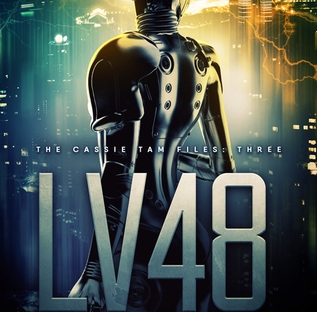 There is a new threat in New Hopeland and P.I. Cassie Tam is not just the investigator on the case. She is a victim.

There have been a high number of muggings in the area, so Cassie listens to her girlfriend, Lori, and uses the safer roads to walk home rather than the somewhat sketchy short cut. The last thing Cassie was expecting on her walk home was for a case to find her. Attacked by someone that can instil fear and disorientate her, Cassie then wakes up in police custody with an ultimatum.

Elements of the attack made her think of a vampire most likely made possible by tech shifting, which has always made her a little uncomfortable. The scariest part for Cassie is knowing the attacker is coming back to finish what they started.

At the precinct, there is Captain Hoove, Lieutenant Hanson, Corporal Devereaux, and Marshal of the tech shifter division, Donal O’Brien. All four of these characters are interesting, though my favourites are Hanson and Donal. Hanson is a sassy and plays by her own rules, kind of like Cassie, so it was nice to see a friendship here. Donal and Cassie have secrets in common, so there were a nice working relationship and level of trust built between them during the case and it helped Cassie see tech shifting differently.

Bert, Cassie’s gargoyle AI familiar, is still my favourite character of the series. Not only is he loyal and protective, but he really tugs at the heartstrings in LV48. I want my own Bert now more than ever!
Although Lori did not get much time to shine, her relationship with Cassie has grown from the previous book in such a sweet way. I can only hope there is more of Lori in the next book so I can watch this relationship grow even more.

I thought the crime and investigation in this novel were complex but presented intriguingly. The pacing was always what I needed it to be – no dull moments but not so fast I got lost – and the way the story was written kept me captivated in the story. I will be honest and say that The Fox, the Dog, and the King was my favourite of the three, but I still very much enjoyed LV48.

While book 2 was my favourite of the three, I have been very impressed by the Cassie Tam Files and am sad I do not (currently) have another book in this series to read!

What mythical creature would be your worst nightmare?
Let me know in the comments!